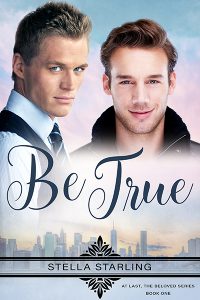 Outspoken, outgoing, and outrageously out, Trevor Rogers isn't one to say no when opportunity comes knocking. And jetting off to New York City to play the part of reclusive billionaire Logan Carter's boyfriend for a Valentine's Day publicity campaign? That's not just a yes, but oh hell yes.

When Logan Carter's business partner, the founder of the popular dating app bLoved, starts receiving death threats and has to stay out of the public eye, Logan is thrust into the limelight. The only problem? Logan doesn't do public. He also learned the hard way never to mix business with pleasure... no matter how tempting someone like Trevor might make it.

Trevor doesn't want to be tied down, and Logan isn't interested in opening up… but if falling in love is all just an act, why does saying “I love you” start to feel so real?

Be True is a gay romance novel of approximately 93,000 words that contains a bossy billionaire, a failed attempt at an utterly impossible sex position, and two men who are destined to discover that the love neither wanted is exactly what each of them needs. It has a Happily Ever After ending, no pesky cliffhangers, and can be read as a standalone… but if you enjoy Trevor and Logan’s story, be sure to keep an eye out for the other two books in the series! Enjoy!