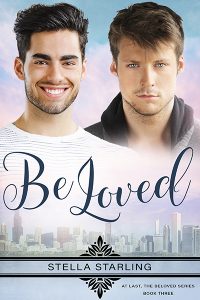 “How do you fall out of love with your best friend?”

Police Officer Brandon Byrne has carried a torch for his best friend since the day they first met. He’s mastered the art of keeping his feelings to himself as Shane, a serial monogamist, falls out of one bad relationship and right into another, again… and again… and again. But now, after ten long years, it’s finally time to face reality.

Shane’s getting married, and what Brandon once thought was his destiny is just never going to happen.

On the cusp of saying yes to his boyfriend’s marriage proposal, Shane Allen is getting cold feet. He’s always wanted a happily-ever-after… so shouldn’t he be more excited at the thought that it’s finally about to happen? But when he takes a compatibility quiz on the popular gay dating app, bLoved, it does more than just help him answer that question, it opens his eyes to some scary truths.

Maybe it’s not just cold feet. Maybe it’s time to get out.

Brandon might finally get his chance at the one thing he’s always wanted, but only if he can protect Shane long enough to take it… because when Shane’s rejection exposes his ex’s true nature, it starts to look a lot like that of a psychopath.

Be Loved is a gay romance novel of approximately 75,000 words that features a nice guy who carries a gun, jewelry filled with the kind of magic that can only come from the heart, fun facts about Uranus, and an emotionally battered man who finally gets what he’s always deserved: love. It has a happily-ever-after ending, no pesky cliffhangers, and can be read as a standalone… but if you enjoy Brandon and Shane’s story, be sure to check out the other books in the series! Enjoy!